How to cook a perfect poached egg (the easy way)

Eggs are amazing, and undeniably poached eggs are the finest of all the eggs. However, they're fiddly to do well and getting the cooking time right can be tricky. Most of the recommended cooking methods involve making a vortex in the boiling water and adding some vinegar, but having used this method for a number of years, I found it produced unpredictable results and made for a washing up is a nightmare.
It sounds pretty weird, but I suggest you try poaching your eggs using cling film. This is a cooking tip that I picked up from b3ta a couple of years ago, and have spent a while perfecting.
You will need: 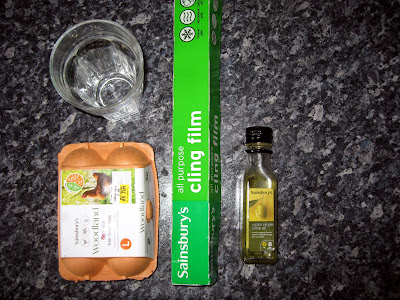 Start by tearing off a square of cling film and laying it over your mug/glass to create a shallow plastic well. Ensure that the centre of the cling film is in the middle of your receptacle. Grease the inside of the well by adding a drop of oil and running it around the with your finger (this makes for easier egg removal). 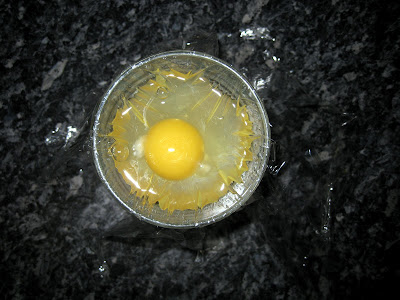 Next, crack your egg into the ready-greased well, then carefully gather the corners of the cling film together - I usually pick a starting corner, grab the opposite corner and move around until I have all the corners neatly together. Next, seal the egg in by twisting the cling film round. Make sure you remove all the air from the cling film pouch when you do this as air bubbles prevent perfect cooking. 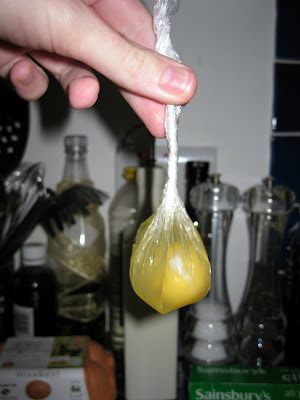 Finally, loosely tie the top of the cling film and your egg is ready to cook. If you're doing a batch, you can pop it on the side now while you wrap your other eggs.
To cook, bring a saucepan containing enough water to cover the eggs to a fast bubbling boil, and then drop your eggs into the pan. Set a timer for 4 minutes and then use the cooking time to get on with making your toast/beans/tea/coffee etc. 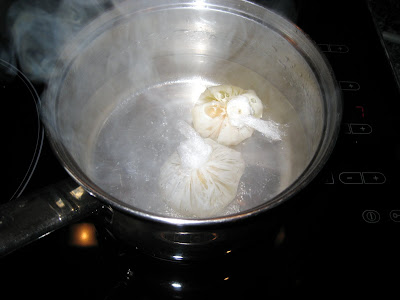 Once 4 minutes is up, fish the eggs out of the water and pop them on the side. 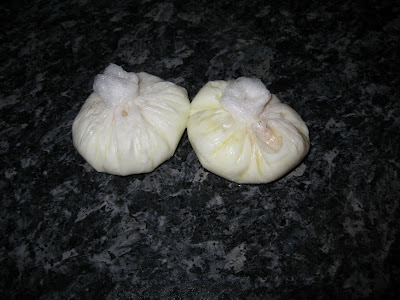 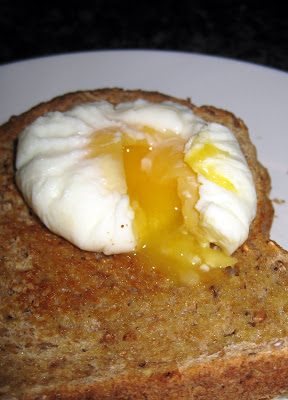 Voila! A lovely poached egg, cooked on the outside and runny in the middle with no messy washing up. Give it a go and let me know how you get on.
Please note that the example is quite a long way from my normal standard. I was so caught up in taking the photos that I ignored the timer for a bit too long and also burnt the bacon. May was not impressed.
Posted by Tim Poultney at 23:01

Cool, I've found the whirlpool method to be moderately OK, but as you say, messy. The only thing that concerns me slightly here is over-oiling the egg (it shouldn't really be slippery, I feel). Is that a problem in practice?

The frequency of poached eggs I eat would cost me a fortune in cling wrap! Great idea though.