When I suffered some back pain last summer I was forced to take a break from running. Once the pain had subsided, I tried to resume running with two 20 minute sessions a week, but found that I just experienced further back stiffness and pain. This was a real knock to my confidence and I was wondering whether or not I'd ever be able to get back in to running.
When I described my frustrations to my masseuse (who is a triathlon and Ironman competitor), she suggested that I try a walk-to-run plan. These plans are designed for people who are new to running, but the gentle and gradual increase also makes them suitable for recovering from an injury. After trialling walk/run intervals on my own for a week or two and regaining some confidence, I decided to start following a formal training plan. After some searching, I settled on the Nike+ Coach walk to run training plan and equipped myself with the Nike+ GPS app for my iPhone.
Based on my successful trial runs, I decided to join the plan in week 4. It took me a little while to work out how to achieve this, but all you need to do is work backwards and then set a date in the past as your starting date. Unfortunately, Nike haven't integrated their Coach plans with the Nike+ GPS app so you have to check manually each day what you're supposed to be running. To help me keep track, I decided to print out the full schedule to use as a reference, but discovered some serious errors in it, which thankfully Nike quickly corrected.
As I started to track my progress, I soon noticed that I was running much further than Nike's recommended distances. I reported this to Nike and they recommended that I shouldn't worry too much about the distance I was covering, but just stick to the advised times. I'm a little disappointed that the Nike+ Coach plans aren't personalised at all; it wouldn't be hard to ask users to input their distance covered for walking/running for a set period. In fact, if Coach was integrated with Nike+ GPS, plans could adapt to their users automatically.
I found that the issue with the recommended distances was compounded by the lack of guidance Nike provide on how to run. At 6'4" and with my stride length, if I tried to stick to their distances I'd be moving so slowly that I'd be using unnatural biomechanics. Given that this is a beginners' plan, and that the most common beginner mistake is to run too fast, I'm quite surprised that Nike aren't sharing their expertise. An article introducing perceived effort or another strategy for controlling pace would not go amiss.
To demonstrate just how far off Nike's guidance I was, here are some graphs:
I ended up running 75% more miles than advised!
Although there's been some niggles along the way, I've really enjoyed the Nike+ Coach walk to run plan. It has built up both my confidence and fitness and I've always felt safe following the plan. It also helped me to achieve my goal of returning to parkrun (free, weekly timed 5k) which I did at Basingstoke on Christmas day: 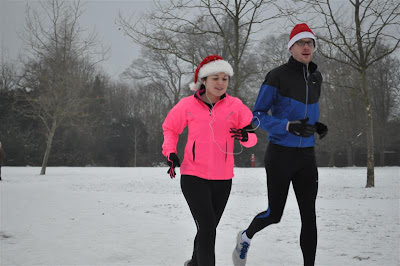 I do have some gripes with the Nike+ GPS application however. For one, you can only track running with it, which seems a bit strange. I have also experienced my workouts being randomly paused, and given that the Coach plan requires you to do intervals regularly, the lack of an interval training feature is a real pain. The easiest way I found of easing this pain is to change the "Voice Feedback, At a Set Time) option in the Nike+ GPS settings to 1 min.
The voice announcements are irritatingly frequent when you're trying to do two sets of walk four minutes and then run six, but I found it preferable to the alternative of running while holding and looking at my iPhone. That said, part of the walk to run plan in week 9 is doing 20 sets of walk 30 seconds, run 1 minute 30 - for this I did have to run holding my phone and I felt my training for those sessions was cumbersome and less accurate.
I ran yesterday using RunKeeper Pro (free until the end of January 2011) and I must say that its ability to deal with different sports and intervals place it well ahead of Nike+ GPS. Also, the quality of data available on the web seems better with RunKeeper too, check out this comparison: 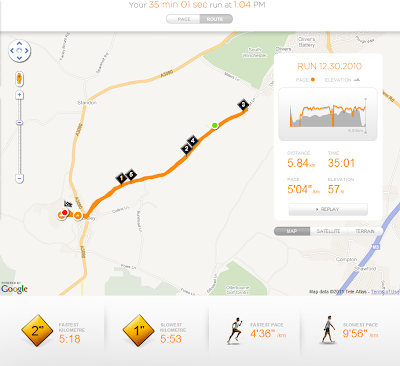 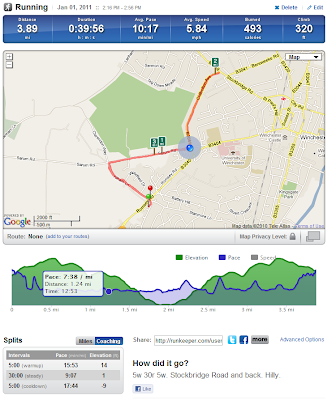 RunKeeper Pro
Interestingly, before I took those screenshots I was going to write that RunKeeper has more data, but in actual fact they're closer than I thought. I think this speaks volumes about the presentation of the data, although Nike seem to be aiming for a simple/consumable interface, at this moment in time RunKeeper are delivering more successfully.
I particularly like the way RunKeeper records your splits and you can even edit the recorded GPS points manually if you're so inclined. That said, the interface in Nike+ GPS and the screen lock feature is really nice, plus although they're a little corny I like the encouragements you're given at the end of each run and the messages from Paula Radcliffe and Lance Armstrong when you set a new PB.
To summarise, the Nike+ Coach walk to run plan is a very good way to either start running or get back into shape following an injury. Thank you Nike for getting me back into running and helping me achieve my goals. You can improve though, given you are sports experts, some of what's you provide is a little perfunctory. Your forums are good and responsive, but under-staffed (hi Clover!) and the lack of "how to run"/"how to warm up/cool down"/"how to stretch" information as part of the plans is surprising.
The lack of an intervals feature in the Nike+ GPS app is a serious defecit and if you could deliver a tight integration between the Coach plans and the Nike+ GPS app so that you could simply start the app and it would tell you what to run (plus a button to skip a day!) and personalise the plan based on how fast each user walks/runs that would be truly amazing.
Posted by Tim Poultney at 16:00

Hey! I clicked on your link on the Nike+ forum. I used the schedule for the same purpose as you did (not using nike+ GPS apps, don't have an iPhone, use iPod Nano). I also started at week 4 in recovering from a lateral collateral ligament injury. I also ran a lot further than the schedule says but I really was taking it slow. I blamed it on the fact that, given the fact that week 1 = 15 min walk, the schedule probably wasn't aimed at a 5'10 lightweight but at your classic obese couch potato who never saw a running shoe in their life. Never noticed the lack of info, probably because I didn't need the info.
But hey, it did help me recover from the injury.

Do you know where i can download the walk to run 5 k nike plus coach program to my mac calendar?

It is impossible for to find it trough my nike+ account or on nike rinning . Com

Email me at dieter at stedica.com