We had an excellent week in Taipei so I wanted to write a little bit about our experience. Taipei is the furthest east I've traveled, beating my previous best of Sri Lanka by a good distance. It's also a really long way away; with our routing via Singapore meaning that we flew 8762 miles each way. We stayed in an apartment which was very centrally located and directly outside exit 1 of the Zhongxiao Dunhua Mass Rapid Transit (MRT) station. We arrived in the evening and arranged a transfer via the apartment rental company. This worked very well as we'd been travelling for 21 hours and I don't think I could have coped with sorting out either public transport or a taxi.

We were met at the apartment and shown around; it was small but well apointed with 2 beds, 2 bathrooms, a kitchen, a washing machine/tumble dryer, aircon and free wifi. Jack came to meet us at the apartment when he finished work and then took us out for a walk to get our bearings and for dinner at Kitchen Pucci, where Lisa came to join us. It had good dumplings, but terrifying tea bags: 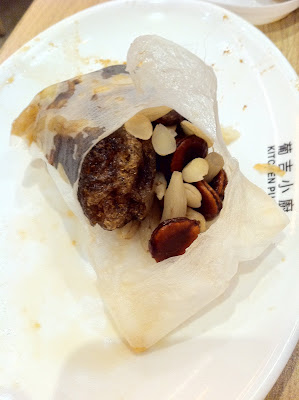 Teabag terror.
The next morning I nipped out for an early run and we then walked to the Sun Yat-sen Memorial Hall and then onto Taipei 101 via smith&hsu, an truly excellent tea house. Taipei 101 was the worlds tallest skyscraper until it was diminished by one in Dubai last year, although they still claim the fastest elevator in the world (Wikipedia suggests this may be a lie, but it's pretty freaking quick either way). It was pretty overcast on the day we ascended, so the 360 degree view wasn't quite as amazing as it could have been, but it was still excellent. My personal highlight was checking out the 660 tonne tuned mass damper (affectionately known as damper baby) that occupies the centre of the 88th-92nd floor and can move by 1.5 meters in the event of an earthquake or typhoon. We ate at Momoya in the Taipei 101 basement food court before catching the MRT over the Chiang Kia-shek Memorial Hall just in time to catch the 5pm flag ceremony. After a bit of a rest, we ate at Sweet Dynasty just over the road from the apartment.

On Saturday we took the train from Taipei main station to Ruifang, and then rode the Pingxi line up to Jingtong for a walk around and a browse of the market stalls. It was wet and grey so we skipped some of the stops and missed out the walk to the waterfall, but it was good fun none the less. In the evening we ate at Din Tai Fung and then had a few drinks at On Tap and played Jenga. By Sunday, the rain had intensified so we hid out in the Taipei Fine Art museum, taking in the Monet Garden exhibition and grabbing some lunch in the basement cafe. May and I went for a stroll around Ximending before we all met up at MOT Kitchen to celebrate Judith's birthday. I took a detour on the way back to the apartment and had an excellent if somewhat painful foot massage.

The rain had cleared on Monday so we visited Longshan temple and the botanic gardens before catching the MRT up to Beitou to visit the public thermal baths (80p entry!). The baths were lo-fi, but delicious with temperatures ranging from 39 - 45° C. In the evening we visited Shilin night market with Jack and ate street food whilst browsing the stalls. Best discovery was a deep fried egg/pancake combination brushed with soy sauce and the best market items were the Engrish t-shirts.

Tuesday had the best predicted weather, so we seized our chance to go and do some hiking. We headed north to the Yangmingshan national park and hiked up Mount Qixing. It was a beautiful hike through forests and then as we climbed higher through arrow bamboo. At the peak we saw an old guy doing tai-chi and shouting at at the world from the four corners. We descended to Saioyoukeng and checked out the thermal area with it's fumaroles and boiling pools and after a bit of a "have we missed the shuttle bus? why is that stray dog following us?" panic, caught the (terrifyingly driven) shuttle bus back to the park entrance.
We checked out of the apartment on Wednesday and moved to the Taipei Park Hotel for one night. After checking in, we went for a run around Daan park before having a guilty western lunch from Starbucks/Subway. In the evening, we raced up Elephant Mountain with Jack to take in the view of Taipei 101. We made it just in time for sunset, but I learned that my carbon-fibre travel tripod isn't really sturdy enough to reliably hold my 450D + 24-105L for long exposures. Thank Jeebus for the Ixus. After dinner at NY Bagels, May and Jack went to meet Judith at her hotel and I headed out to do some night photography. When my camera battery died I went over to Judith's hotel too for a quick beer and a nose around her palatial room.
We flew out to Bangkok on Thursday 31st, but not before we'd taken Wenshu line to Taipei Zoo Station and ridden the Maokong Gondola cable car up to Maokong station for a walk around the hillside and lunch at a tea house.
Posted by Tim Poultney at 09:48

Hi,
May I know which apartment did you actually rented in Taipei? Can I have the contact and mind sharing the photos of the apartment?

Look forward to your replies soon and thanks in advance,
Janice
janice_2k@hotmail.com

I came from Taipei!!
I found your blog while googling about Nike's walk to run program. Then saw that you recently made a trip to Taipei. I hope you enjoyed the wonderful city, people, and food in my hometown. :-)