This weekend I did two stupid things. First, as we were loading up the car and setting of for a weekend of visiting friends, I managed to leave my walking boots on the back of a neighbour's car. My arms were so full of stuff that I couldn't get to my keys to unlock the boot, so to free up a hand I popped my boots down on the errr... boot of the car parked next to mine. Unfortunately, after packing the boot I neglected to pick them up again. Boots FAIL.
Secondly, on returning home on Sunday evening, I did some washing. As I was hanging it out to try I noticed a worryingly familiar shape inside one of my pockets. Yes, my "missing" 2nd generation iPod Nano went through a full 40º wash lasting 2 hours 3 minutes, including rinse, wash and 1200 RPM spin. Whoops. iPod FAIL.
I'm feeling upbeat now though as after leaving a note on the windscreen of the neighbour's car on my way out to Pilates tonight, my boots have been returned to me unharmed. Also, after sitting in the airing cupboard for 24 hours, I braved plugging my iPod into the PC and despite the gnarly water damage to the screen, it powers on and my music is still in place. It remains to be seen whether or not it will hold charge, but for now I'm declaring WIN. 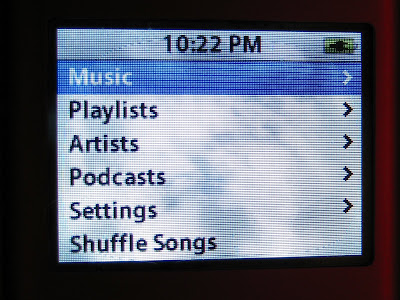 iPods are pretty well modularised and it's relatively easy to replace individual components (screen, battery, wheel). There's a whole raft on ebay of people who buy broken iPods, salvage the usable parts and make a whole working one.

The only problem is when they have a full set of broken parts, they will put them together into one and sell it on ebay as a broken iPod.

It'll then probably get picked up by another refurber who will find this out and stick it back on ebay, so in theory there should be a growing number of entirely broken ipods on ebay.