You may have seen my previous post about my iPod going through the washing machine. Well the other night I tried a repair job. In my previous post, I was escstatic as the iPod still powered up and contained all my music despite taking a trip through the full 2h03m, 40 degree washing machine cycle. Unfortunately, as soon as I unplugged it from the USB cable, it just switched straight off. Duff battery, thought I and off to eBay I went for a replacement battery for the princely sum of £3.49.
I dismantled my Nano with the help of an instructive (if monotonic) YouTube video and the case tools that came with my replacement battery (shown below in green). Disassembly requires the removal of 6 tiny philips screws and some fairly terrifying wiggling. Once you're in, you can really appreciate that there really isn't much spare room inside; quite a marvel of design really. 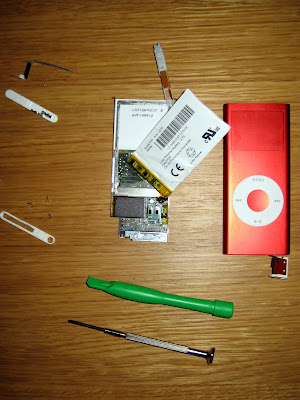 Once disassembled, after taking a look at the soldering precision required, and bearing in mind that I don't own a soldering iron, I decided it was time to get some help. 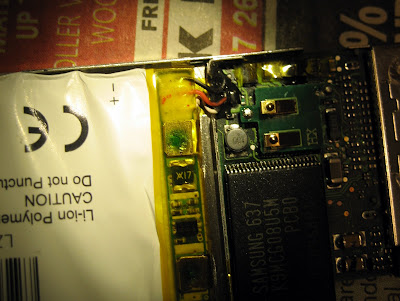 Enter Dean, friend, confidant, man with tools and general internet legend. After braving the frost down his road, the Nano was ushered through to his 'workshop' (dining room table) where surgery began. Job one was removing the sticky gunk covering the solder keeping the current battery in place on the PCB. This was achieved through a combination of soldering iron, stanley knife and screwdriver until we could clearly see where to solder the new battery on to. 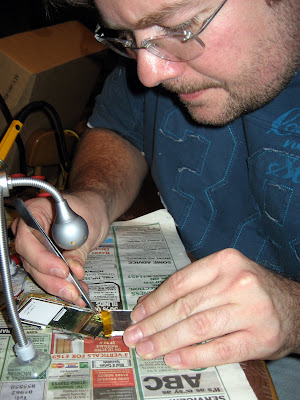 At about this point, Dean told me about the properties of Lithium Polymer batteries, and in particular how you shouldn't ever touch the contacts of one together. If you do, you can start an hard to stop chemical reaction that ends in both fire, and explosion. It was one of those occasions where you've read the safety instructions on the battery ("Do not place in water or fire, do not pierce, do not touch contacts") and thought "yeah, whatever" but then get a bit scared of the task you're undertaking. Who knew iPod repair was this potentially dangerous? 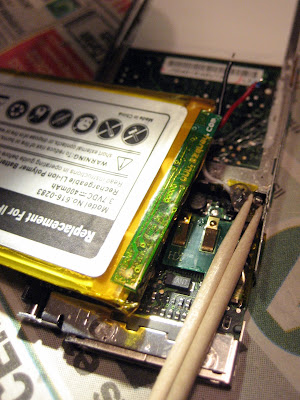 With Dean's steady hand and nerves, surgery resumed with a renewed focus on how to keep the contacts from touching while we soldered and frequent checking of the temperature of the battery. Our final solution was a glue gun, and lots of toothpicks. After checking the current was crossing the PCB, I returned home for operation reassembly. You may have remembered that I said 6 tiny screws came out of the iPod, well I can now reveal that only 4 went back in, whooops!
On connection to the PC, the iPod powered up and everything was looking great until I discovered that 1) the click wheel wasn't working and 2) when I unplugged the USB, it turned straight off again. Boo hiss.
It was quite late by this point and I'd become so freaked out by the prospects of a lithium polymer explosion that I decided to fashion an air-tight box to leave the Nano in overnight. With this achieved, the next question was where to position it for maximum safety. My initial thought was in the car (NO) before I settled on in the porch between the 2 doors. Only once I'd climbed into bed did I think this through and realise that if there was some kind of incident, I'd just neatly blocked the exit from my 2nd floor flat. After getting up to rectify this, I finally settled on leaving it in the bath!
Any intrepid readers who want to give this a try might find this guide useful.
Posted by Tim Poultney at 08:59