You may be aware that over the last couple of years I've had some problems with my arms and neck, caused by repetitive strain injury (computers are bad, mmmmkay?). I've been seeing my current physiotherapist (Sam) for nearly 2 years now, and she's been trying to convince me for a while to have some acupuncture. Sam is truly amazing, and I trust her completely, so after much deliberation and in spite of being a needlephobe, I decided to give it a whirl today. With a previous (inferior) physio, I'd had 1 needle in my shoulder before, and didn't get on with it too well, so I spent the four weeks between my last appointment and this one mentally preparing myself for having acupuncture in my shoulders.

In my appointment today Sam asked if I wanted to go ahead with the acupuncture and I said yes; she ran me through the consent questionnaire where I indicated that I was a bit of a needlephobe (a tick between yes and no) and got me to sign on the dotted line. She then got me to lie face down, and from behind me I could hear her wheeling in her trolley of needle related apparatus. In a perfect illustration of why she's so awesome, as she wheeled the trolley in Sam asked me if I'd like her to describe what was going on, or just do it. My control freakery response was for her to describe the process "a little bit", which started out with her preparing my skin with an alcohol wipe. I think it's at about this point that I started to freak out a bit as she wiped across my hands. Now, I'd spent a month doing mental prep for needles in my shoulders, no-one had said anything about needles going into my hands (yep, Tim is not great with surprises).

She popped two needles into my shoulders, and then proceeded to pop 2 needles into my hands, into the fleshy bit between the thumb and index finger. The needles in my shoulders were fine, but the needles in my hands resulted in a very strong sensation that I don't have adequate words to accurately describe, but can certainly say was unpleasant. I suspect that this was mostly caused by my brain not coping very well with the unexpected needles in my hands and I'm taking it as an excellent illustration of the mind's power over the body. Thankfully, May had come along to the appointment with me, and sensing my freak out she talked to Sam about a selection of mundane topics while I tried to relax into the acupuncture.

After about 10 minutes, Sam took the needles out and chose this moment to reveal that it's completely normal to continue to feel the needles after they've been taken out. Although I think she told me at the right moment, Tim does not like things he's not enjoying and was expecting to end to unexpectedly continue. After resting for a while, I slowly got up and sat on the edge of the bed as instructed. Apparently, once there I went quickly through white and straight to green and when asked how I was responded with "quite nauseous". This response resulted in an excellent and very rapid private hospital response of an oxygen canister and mask, a blood pressure test, sugary tea and enforced shortbread before I could even think about leaving (apparently, there's a lot of paperwork if they let you go and you faint). 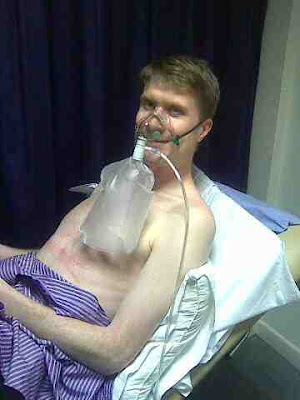 Sam did suggest that one the reason I might have felt so weird was that acupuncture triggers the release of loads of endorphins in your body. Endorphins are opoids, which are the bodies form of opiates. I don't think that's the reason why I freaked out, but it could be a handy excuse if I ever feel I need one.

Now although it probably sounds like I really didn't enjoy the experience, I'm completely open to having more acupuncture in the future. This is for 2 reasons: 1) I experience some good pain relief in my shoulders and 2) I think my reaction was mostly because I didn't know what to expect, and now I know exactly how it goes and what the worst case scenario is. Any worst case scenario that involves enforced shortbread isn't too bad in my book.

Tim, very many congrats - I feel very proud even though I've only briefly met/got to know you.

I'd like to point out that my conversation was not mundane, but instead carefully designed to be far enough away from the topic of acupuncture to stop Tim focussing on the needles. But definitely not mundane. I don't do mundane. :-)

Well done for giving it a go given your phobia. I had the opposite reaction - I found the needles completely painless, and given I used to be a needle-o-phobe too, surpisingly calm with it - however it did nothing for me in terms of pain relief.

Given our combined experience, maybe it's true - no pain, no gain.

You're such a girl Tim.