I've finally sucumbed and bought a netbook. When Asus bought netbooks (small, light, low powered, cheap laptop) to the mass-market with the Eee PC in late 2007, I was interested, but the specification wasn't quite good enough to convince me to part with my cash. Then last year, new netbooks arrived powered by the Intel Atom N270 chip arrived with better performance and battery life, making me a little more interested. Of course, as with all technology purchases, you can always wait and get something better, and I'd decided to do just that and hang on for the dual core Atom processors rumoured for the summer.
Then I started out on my current project, and became a commuter. After 8 weeks of that and lugging my huge work issue Thinkpad T60p around, when I spotted a great deal, I couldn't resist. The choices for me where between the Samsung NC10 and the Lenovo S10e, I finally plumped for the S10e for the keyboard quality. Here are some pics to give you an idea of size: 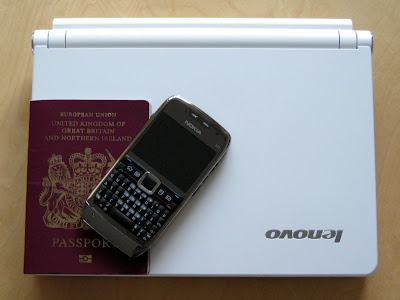 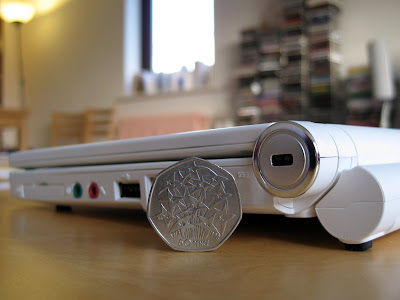 The spec is Atom N270 1.6Ghz, 1.5Gb RAM, 160Gb HD and 6 cell battery. It weighs in at a very comfortable 1.3kg and the 6 cell battery gives it a nice weighting towards the back. The screen is clear and sharp, very usable on one-above-minimum brightness and downright impressive on maximum brightness. I've yet to time how long I get out of the battery, but the general expectation seems to be about 4.5 hours. Should you wish to upgrade it, pleasingly both the RAM (1 slot) and HD are user replaceable, with the obvious candidates being 2gb RAM and a 7200 RPM HD. My only minor gripe is that after 2 days in my bag, a small part of the silver "e" of "Lenovo" on the lid has come off.
I chose to save some money and gain some RAM by ordering the Linux edition, but I've installed Windows 7 beta onto it as XP is just too old and naff (I'm looking at you sleep mode), and Linux doesn't run all the applications that I want.
Loading Windows 7 beta was very straightforward, and installation from a USB key completed in under 25 minutes with very minimal input (partitioning and licence key only iirc). If you want to try out Windows 7, here's the links that got me up and running:
1) Installing from USB key (use the command "list disk" first to ensure you format the usb key, not your hd)
2) Get a licence key (requires a Microsoft Passport login, eg. MSN, Hotmail etc)
3) Fix the desktop.ini bug
The S10e shows one missing device in Windows 7 (not sure what) and neither scrolling on the trackpad, the FN+F5 wireless key or the wireless off key work, but otherwise everything is functional right out of the box including the webcam and mic.
For applications I've installed:
The only thing I wasn't able to install was Comodo Firewall as the installation failed.
With that lot installed, Windows 7 boots, connects to wi-fi and gets me to Gmail in about 1 minute 25, goes to sleep in about 8 seconds, and wakes up in under 2. It runs very nicely and certainly feels snappy enough. I was suprised that there's enough power to run Ableton Live, but it runs pretty smoothly, although the screen height (576px) makes things a little tricky.
Windows 7 itself seems to be pretty stable, although the wi-fi connection tends to drop every once in a while. I can recommend not accepting the wireless driver Windows 7 offers for the S10e, as that completely knackered my wireless and I've found that AT&T causes the odd bluescreen, but I blame that on them not Vista. I'll post again about battery life in a couple of weeks.
Posted by Tim Poultney at 17:49