I'm in Yellowstone, the first National Park ever created in the United States. It's a big place, comprising 2.2 million acres and although it's highly accessible to visitors it's still a wilderness, with only 370 miles of road and less than 1% of the park developed for tourism. Further contributing to the wildness is the abundance of wildlife including: bears (black and 'griz'), bison, moose, elk, deer, mountain lions, wolves, bald eagles and more. As if that wasn't enough, Yellowstone is a geological marvel – it sits atop a huge volcano and contains over 50% of the world's geysers, plus hot springs, mud pots and fumaroles.

The main tourist experience consists of driving around a figure eight of roads established in 1905 by the US Army Engineers Corps. There's plenty of goodness to be had by planning out an itinerary of hikes and sights, but I've found that the most rewarding experiences so far are the unplanned, unexpected and impromptu. I'm still feeling humbled today from our stroke of luck whilst driving back to the hotel last night. As we drove back towards Mammoth from the Lamar Valley (a.k.a. the American Serengeti), we spotted a long line of tail lights and a large number of vehicles parked at the side of the road at the Blacktail Ponds turnout. As we approached the turnout, I could see flashes of movement from the field below and the tripods and cameras lined up on the road side. You quickly learn that in the park, collections of cars parked off road means animals and from the number parked here it was clear that something special was happening.

After parking safely (always pull completely off the road, y'all) and walking back we discovered that the focus of all the attention was a pair of grizzly bears protecting a bison carcass from a pack of wolves. Wolves are endangered in North America and were controversially reintroduced to Yellowstone back in 1995, so just seeing a wild wolf is rare enough, but to see the interaction between a pack and a pair of grizzlies I think we were incredibly lucky. Over the next hour as the sun set and the light faded we watched on entranced as the wolves circled the bears and then darted in, only to fall back as the bears charged and swiped at them. After a while, all but the alpha wolf retreated away up the hill and we assumed that the show was drawing to a close. However, the alpha wolf continued to stalk and harass the bears. Suddenly the wolves began to howl; a solitary voice was quickly joined by others as the hillside lit up with this eerie and haunting song. 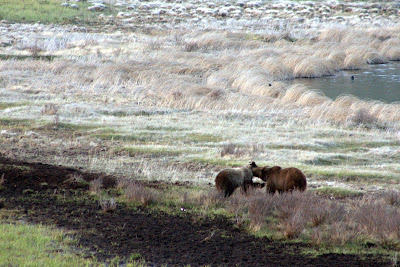 Information was being passed from person to person, most of it originating from the park rangers so we came to learn that the bears were a mother and three-year-old cub, and that a total of nine wolves were out on the hillside. We also learned that until very recently the bison carcass had been frozen into the lake, but since being exposed by the thaw the bears had been dragging it out of the water and guarding it from all comers. The wolves must have been attracted by the carcass (May has been enjoying the way uncommon words have crept into conversation – I've never heard or uttered the word carcass as much as in this week) as the rangers didn't know of a local pack or den. 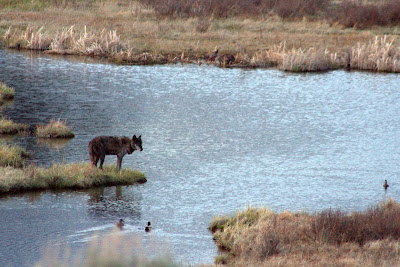 Just as we were preparing to leave, someone beside us proffered her binoculars and said “Have you seen the third grizzly coming down the hill?”. Sure enough, a larger and much darker bear was charging down the hillside, scattering the wolves as he made a beeline for the carcass. We learned from the ranger that this was a male bear, and when he approached the carcass the female bears backed right off. In the twilight we watched the male bear settle down on the carcass, as the females looked on and the alpha wolf continued to circle. The whole experience felt like watching a segment from Planet Earth unfold right in front of us and was totally captivating – I don't think I'll ever forget the sound of that wolf howl as it echoed up the hillside. People we've bumped into since have confirmed how lucky we were to see this as even regular visitors have rarely seen a wolf, let alone a whole pack harassing grizzly bears. 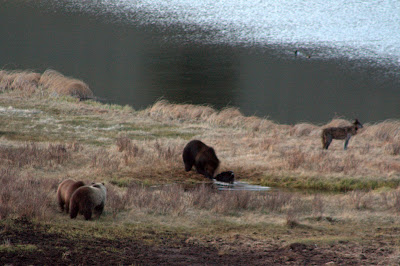 As if to reinforce my feeling that the park is best experienced serendipitously, my efforts to catch a repeat performance this morning by getting up before dawn drew a blank. I arrived by 05:45 and found both the turnout and the roadside full of cars. I joined the line-up of tripods and my only reward was a single coyote. I think I'll stop trying and trust the rest of the holiday to luck.